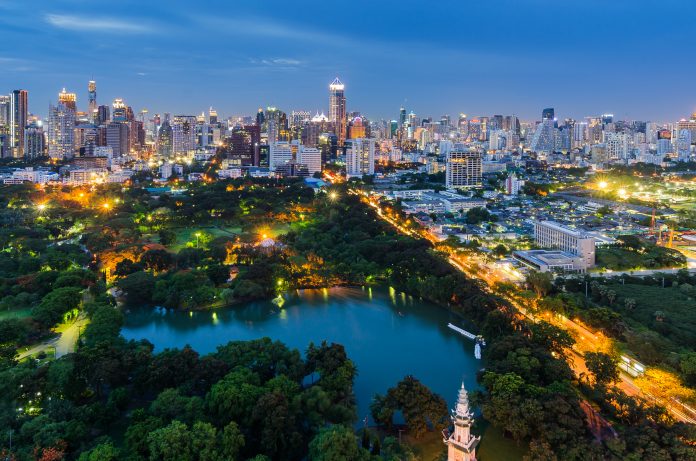 Known to be one, if not, the most prestigious address in the capital, Lumpini is the name given to the pocket of central Bangkok that borders the north side of Lumpini Park that includes the wide laned roads of Ratchadamri, Langsuan and Wireless that all sit parallel to one another. Home to many of the city’s embassies that are set amongst spacious grounds in lush settings, over the years the area has welcomed shiny new residential developments. These have replaced traditional Thai properties as this location has become an increasingly popular place to live as residents are keen to take advantage of its position in the heart of the action. Much of the land in the area is owned by the Crown Property Bureau meaning that leasehold properties are sold on a 30-year lease.

Encompassing the BTS stations of Ratchadamri on the Silom line, and Chit Lom and Ploen Chit on the Sukhumvit lines of the BTS Skytrain network, living in Lumpini means getting around Bangkok is easy. From the glitzy shopping malls of Siam Paragon and Central Embassy, the business district of Sathon and Silom, and the nightlife of Sukhumvit, Lumpini is regarded to be a high-end part of town.

Aside from its enviable location, Lumpini has a certain air about it. Partly due to the quality of the construction of the luxury condominiums that have grand entrances adorned with neatly manicured greenery, but also the pavements are, for Bangkok standards, wide and walkable. It is easy to see why Lumpini has such a status, and there is a reason why property is at a premium here.

Whilst some may feel that Lumpini lacks the community feel found in other residential spots of Bangkok, which could be result of the decline of traditional Thai life combined with the fact that many residents are securely tucked away in their residences, the area certainly makes up for it with convenience. 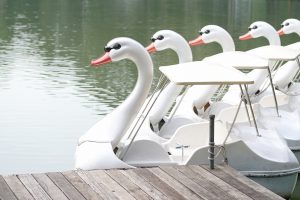 Bangkok’s biggest, most prized and loved park, Lumpini Park, is a stone’s throw away offering a tranquil escape from city life whether you fancy a stroll, run, cycle or even a row on the lake. The city’s most prestigious sports club is within arm’s reach, The Royal Bangkok Sport Club, with its sister club, the Polo Club tucked away off Wireless Road. Golf, tennis, cricket, and swimming are just a few of the sports on offer, plus the Royal Bangkok Sport Club welcomes horse racing twice a month where all walks of life come together for a Sunday flutter.

For everyday amenities, such as a food shopping, pharmacies, and other retail outlets, many of the residents’ head to Siam or Silom which are both just down the road albeit in opposite directions. A variety of boutiques can be found on Langsuan, and most commercial complexes that are mainly situated on Wireless and Ploen Chit, are geared up with everyday services to cater for office workers. A fair few of the condominiums come with an impressive range of facilities including gyms, swimming pools, squash courts, tennis courts, golf simulators, and libraries meaning their residents have everything they need on their doorstep. 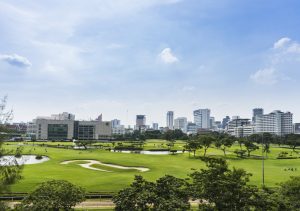 Accommodation is scattered around this area largely on the main thoroughfares. Residences on Ratchadamri boast incredible views over the pristine Royal Bangkok Sports Club. Some enjoy an outlook over Lumpini Park and some even brag both. Langsuan is equally as popular as is in and around Wireless, namely Soi Rumarudee which has the bonus of being close to Ploen Chit BTS Station. Further north, Soi Somkid that heads in the direction of Phetchaburi Road is home to several styles and types of accommodation suited to a wide range of budgets for those seeking a central address.

Whilst there is a vast choice in swanky pristine buildings, if location is what you are after and you are happy to trade in on newness, then there are some older buildings in the area that come with a more reasonable price tag. Some are situated in the sub Sois of Ratchadamri Road that include Mahatlek Luang Alley one, two and three. Off the main drag, these are even quieter pockets tick that central location whilst letting you rub shoulders with some of the most sought after residences in Bangkok.

A few of the eating options in Lumpini are situated in high end hotels that are spread across this locality. Often with a nice bar thrown in for good measure, these are perfect if you fancy hopping from one plush hotel to an even plusher one. However, a number of cafés, restaurants and bars can be found on Langsuan or on Rumarudee Village on Soi Rumarudee. A new mixed use scheme called Langsuan Village situated on the corner of Langsuan and Sarasin Alley is currently under construction and once completed will welcome even more eating and drinking establishments to this area. Lumpini has limited street dining options in the evening, however many vendors pop up during the day to feed the area’s office crowds.

Why should I live in Lumpini?