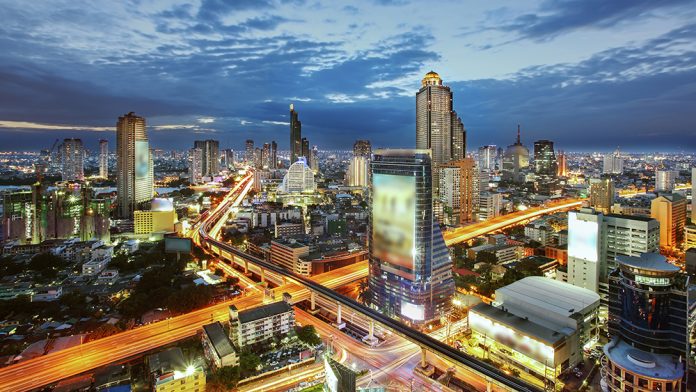 The buzzing metropolis of Bangkok is locally known as Krung Thep, translated in English to the ‘city of angels.’ Thailand’s capital city since the 18th century, is one of the most visited cities in the world due to its diverse offers that appeal to the masses. Attracting not only tourists, but also expatriates who come to the city for their work from abroad, to simply enjoy a change of scene or as a retiree, Bangkok offers its residents a range of lifestyle choices. From quick street food on the go, to some of the finest dining in the world, a wealth of culture to soak up and local customs to get acquired to, restaurants, nightlife and a shopping scene like no other, Bangkok really has it all. Made up of connecting canals and waterways that all lead to the city’s Chao Phraya River, an alternative commuting option, Bangkok has been given the name as the Venice of the east. Bangkok’s efficient mass transit networks consists of the Bangkok Mass Transit System (BTS or Skytrain) system which lets you whizz across the city above the ground in a futuristic fashion, and the Metropolitan Rapid Transit (MRT) which is situated underground. Both of which are currently undergoing huge expansion to open up the city even more.

Like the rest of Thailand, Bangkok experiences two seasons, dry and wet, but some residents describe it as ‘hot, hotter and hottest.’ Temperatures hover around the 30 degree Celsius mark, reaching in the 40s in the even hotter season, and dipping to mid 20s in winter. According to the World Meteorological Society despite Bangkok not achieving the highest peak temperatures it is still the hottest city in the world due to its year round average temperatures.

Central Bangkok is split into 50 districts, with a vast range of accommodation available whether it be a condominium, modern townhouse or a traditional teak wooden villa, every desire and budget can be met. Accommodation situated on the mass transit networks are in most in demand, with many of the popular expatriate areas being dotted along the Sukhumvit and Silom lines of the BTS, with new developments emerging on the purple line – a new branch of the MRT. 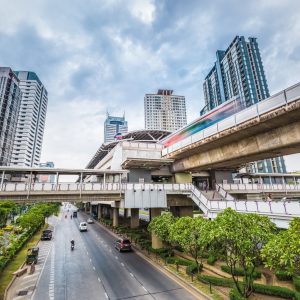 Addresses between the Sukhumvit line stations of Phloen Chit and On Nut offer access to countless shopping options, green spaces, restaurants and international schools. Thong Lor is famed for its exciting nightlife, and people flock to Asoke as it straddles the BTS line and the Sukhumvit station of the MRT, giving residents transport flexibility. North of the city on the Sukhumvit line towards the famous Chatuchak Weekend Market is Ari which has become a popular place for those seeking city life in a quiet and green part of this cosmopolitan city.

Lumphini Park has some of Bangkok’s most prestigious addresses due to their vicinity to this well looked after green space, with many people opting to live off the Silom branch between Ratchadamri and Saphan Taskin stations that incorporate Bangkok’s Silom and Sathorn areas. Silom is the city’s financial hub by day but once the sun goes down it turns into the place to party. Chao Phraya’s riverside, which can be reached via Saphan Taskin or Charong Krung Road, has become a new preferred place to live as new developments are transforming this working river resulting in accommodation often with impressive views. Charong Krung Road runs partly parallel to the river through Chinatown towards historic Rattanakosin – the Old City – home to the Grand Palace. With many of the Bangkok’s most luxurious hotels being situated off this historic road.

The Purple Line of the MRT is a new branch of the mass transit network opening Bangkok up even further. Providing access to Nonthaburi Province in the northwest of the city, this 23 kilometre stretch starts from Bang Sue’s Taopoon Station travelling up to Bang Yai. As it began developing new condominiums have been launched as the line becomes an established place to live. 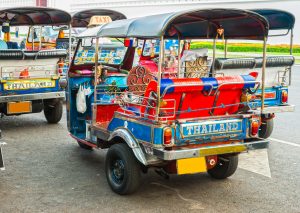 Bangkok has an endless choice in modes of transport to pick from including countless metered taxis that run throughout the city. They are cheap, but are susceptible to getting stuck in traffic so the mass transit network of the BTS and MRT are favoured by many. Tuk Tuk’s are a good option for zipping down a soi but hot and dirty for longer journeys. Bangkok’s main train station is Hualamphong Station in Chinatown where trains travel to the majority of Thailand from. However, to via rail to the popular tourist destination of Kanchanaburi, trains depart from Thonburi Station that is situated on the west of the river.

Bangkok’s two international airports, Suvarnabhumi and Don Muang, are located at opposite ends of the city, each some 30 kilometres from the central district. Suvarnabhumi is the newest and busiest linked to central Bangkok by the Airport Rail Link that runs to Phaya Thai BTS station on the Sukhumvit line and Makkassan station which links to the MRT Phetchaburi station. Long haul flights come into Suvarnabhumi, whereas the majority of domestic and no frills airlines operate from Don Muang which is currently only accessible by taxi or public bus from the nearest BTS Skytrain station at Mo Chit and Chatuchak MRT station.

Bangkok has three bus stations for travel throughout the country. Mo Chit bus station in the north of the city operates routes to the north of Thailand such as Chiang Mai, but also to the west to Kanchanaburi. Ekkami Station on Sukhumvit Road operates bus routes to the east such as Pattaya and Ko Samet. Lastly, Sai Tai Mai Station situated to the west of the river in northern Thonburi, operates buses to southern and western destinations such as Hua Hin. 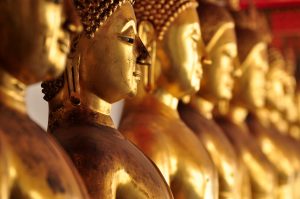 Why should I live in Bangkok?

1. It is an adrenaline ride for all of your senses with something for everyone regardless of the time of day or night – the city never sleeps.
2. Food, food and more food! Dishes from THB 50 enjoyed sat on the side of the soi to Michelin star dining, everyone’s tastebuds are catered for in arguably the heart of Thai cuisine.
3. Bangkok is the hub for South East Asia. A melting pot of talent, many businesses are based in Bangkok partly due to its geographic location making travel across the region easy.